How to Smoke a Brisket

How to Smoke a Brisket

Brisket is the holy grail of BBQ, and getting it right is a huge notch in your pitmaster belt. While there are many ways to flavor a brisket, cooking it properly doesn’t leave quite as much room for experimentation or error. Brisket is a muscular, tough cut of meat, so low and slow is the way to go. When prepared correctly on a Traeger, a smoked brisket is tender, juicy, and irresistible.

How to Prep a Brisket

Trimming the fat is standard procedure with most every cut of brisket. If you have the opportunity to examine the meat closely, you want to look for good marbling. In many cases briskets are wrapped in tightly sealed bags or packaging, but you can still determine the quality of meat based on its grade.

Meat is rated on a standard system so consumers know the quality they are buying up front. The grades of beef are based on the degree of marbling and the maturity of the animal. The grades in order from lowest to highest are select, choice, and prime. There are some lesser grades out there but these three are the most universally recognized in grocery stores and butcher shops. Select and prime cuts are usually the ones you want to stick to so you know you have a good cut.

Nearly all BBQ experts will trim their brisket before smoking. When you trim the brisket you'll:

Much of this comes down to personal preference. Expect to trim about two pounds away from your brisket before cooking. Here's a step-by-step look at trimming brisket.

1. Start with a cold brisket fat cap facing up and pat the brisket dry with a paper towel.

Many championship BBQers use nothing more than salt and pepper as their brisket rub. Others, like Traeger expert Doug Scheiding, recommend a mix of different rubs. So you can keep it simple or mix it up however you choose, but keep these two things in mind:

Injecting brisket is a common technique to ensure more flavorful and juicy meat. There are brands like Meat Church that make an injection or you can use a bone or beef broth. If injection sounds like too much trouble, you can also marinate the brisket. This Traeger-approved marinade features garlic and red wine. This step is optional.

When it comes to smoke flavors, hickory is often mentioned for its robust flavor. Some like to mix it with a milder wood like oak to balance the flavors, and others like to sweeten it with apple, cherry, or maple wood. Any or all of these smoke flavors are a safe bet for smoked brisket, and if you really want to get creative try pecan wood. The nutty flavor adds a whole new layer of depth to brisket, and pairs especially well with sweet and spicy flavors.

Should You Cook Brisket With Fat Side Up Or Down?

We recommend that you cook brisket with the fat side down. Here's why:

How to Smoke a Brisket on a Pellet Grill

Smoking a Brisket on a Pellet Grill is one of the easiest ways to cook your brisket at a steady temperature while also infusing natural smoke flavor. One of the most fun aspects of pellet grilling is experimenting with smoke flavors -- like apple, oak, or maple.

How to Wrap a Brisket

One commonly used method of speeding up the cooking process is wrapping brisket in foil or butcher paper.

Wrapping the brisket will prevent what's called "the stall" — when evaporation from the surface of the brisket halts the cooking process. It also gives you more control over the final appearance of the bark, and can help lock in moisture that would otherwise be lost as the brisket cooks.

Most pitmasters recommend wrapping the brisket when the internal temperature of the meat reaches 165-170 degrees.

How to Tell When Smoked Brisket Is Done

To know if your smoked brisket is done, simply insert your probe. The probe should insert into the cut like it would in room temperature butter which usually happens between 200 and 205 degrees Fahrenheit in the flat. Once your beef has reached that level, let the meat rest for at least one hour.

It's best to rely on a thermometer because looks can be deceiving if this is your first smoked brisket.

Smoked brisket gets its signature bark because of the Maillard reaction which is known for explaining how seared meat gets its signature look and taste. When you sear meat at high temperatures, the natural sugars in the meat caramelize within minutes. The same thing happens at low temperatures over time when you smoke brisket or any kind of meat.

Simply put, the natural sugars in the meat form a crust underneath your spice rub. Only some elements of the rub itself (like salt) will penetrate the surface of the meat and take some of the flavor with it.

The majority of the rub will remain on the surface and infuse with the layers forming there. When the spices and caramelizing layers come in contact with the smoke, the bark begins to turn a very dark color.

How Long Should You Let Brisket Rest Before Slicing?

Let brisket rest at least 1 hour (ideally 2-3) before slicing to allow juices to redistribute throughout the meat. For the best possible flavor.

How to Cut Brisket

Brisket should be cut against the grain for the best mouthfeel and tenderness, otherwise even a perfectly cooked brisket will be chewy.

The point should be sliced into ¼-inch pieces or about the width of a pencil. The ends or any miscut pieces can be used for burnt ends.

How Long Does it Take to Smoke a Brisket

Every animal is different; there's no exact universal algorithm for every cut. However, you can use weight to estimate your brisket's total smoke time. Just remember that internal temperature has the final say. Brisket is done when it reaches 203° internally.

Our general rule of thumb is to plan on between 30 and 60 minutes per pound. For example, a 16-pound brisket cooked at 275 degrees Fahrenheit will take between 10 and 12 hours. The entire process from trimming, injection, seasoning, and cooking will take between 18 and 20 hours.

Give yourself enough time. This is a “good things come to those who wait” kind of deal, but rest assured … you’ll be glad you did.

A “full Packer” brisket contains two distinct parts that cook differently: the point and the flat. The point is more marbled with fat than the flat lean cut, often used for slices. The point is used for chopped brisket or burnt ends. Also known as “meat candy” these cuts aren’t actually burnt -- they just look that way because of the Maillard reaction. And they’re extra sweet, usually served with a sweet BBQ sauce and cooked again separately from the rest of the brisket.

Combine 2 cups of beef broth and 12oz of your favorite BBQ sauce and set aside on a small bowl. Once the brisket reaches 190℉ internal temperature, remove it from the grill, separate the point and cut into 1-inch cubes. Place cubes in a metal pan and toss with beef broth and sauce. With the grill set to 250℉, cook for an additional 1 hour. Pull them out and you’ll have caramelized bite-size BBQ deliciousness.

How to Add Extra Flavor

Simply put, flavor a brisket however you want. Aside from the quality and type of meat you selected, your rub, brine,smoking fuel, and type of grill you use, all play a part in the flavor of your brisket.

If you’re looking for a place to start with brisket, or a foolproof recipe that’s sure to please, check out this recipe for beginner's brisket. The simple rub and long braise in its own beefy juices make this brisket easy to pair with any sauce, or taste delicious and flavorful on its own.

How to Reheat Brisket

When cooking a good amount of brisket, there’s bound to be leftovers, and there are plenty of ways to get creative with them. But if you’re just trying to enjoy the same flavor you had off the grill, all you need to do is cook your smoked brisket in its juices using a drip pan covered with aluminum foil until it reaches serving temperature (about 140 degrees).

If you want to mix up the flavor a little, try smoking it with different wood pellets, or add a splash of BBQ sauce, beer, or broth to your pan before cooking.

Getting Serious About Smoked Brisket

Don’t let your talent go to waste. If you’ve come up with a signature brisket recipe, share it with us and share it with the world #TraegerGrills. When you’re cooking tough meat for a tough audience, flavor, quality, and technique all matter and it’s all covered in the guide for award-winning brisket.

How to Smoke a Brisket:

In total, smoking a brisket takes between 8-10 hours. 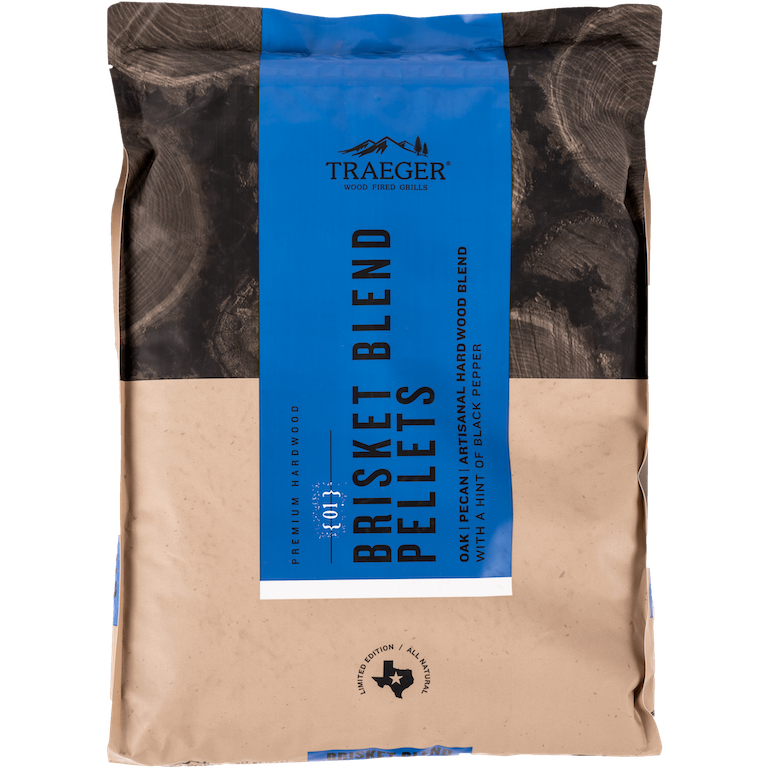 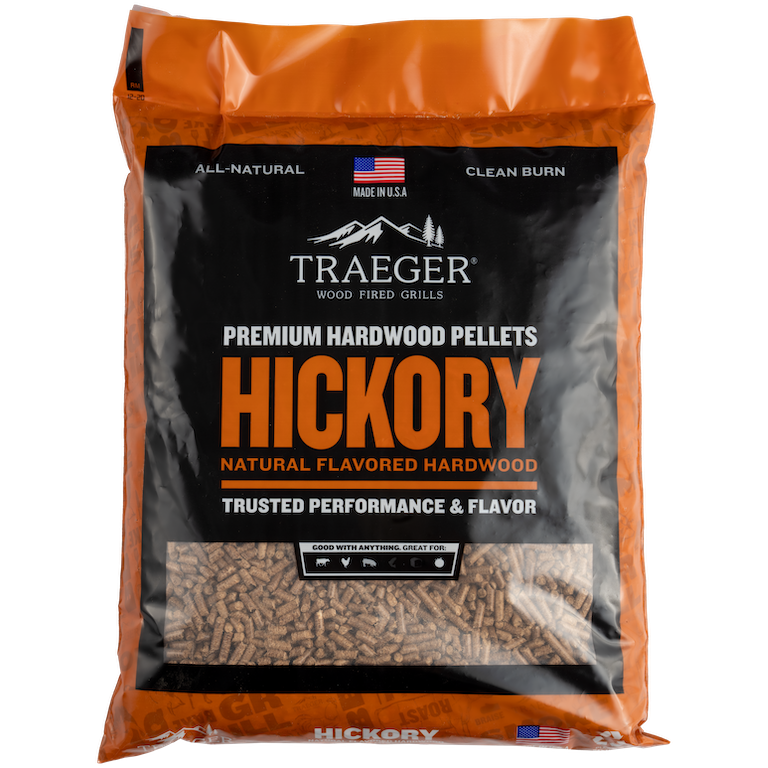 How to Make a Competition Brisket

Learn how to make a competition brisket. Learn how to trim the brisket, season it, and how to smoke it for the perfect flavor in this detailed guide.

How to Make Smoked Ice

Learn how to make smoked ice with our quick guide on how to bring wood-fired smoked flavor to your cocktails. Infusing smoking flavor into your Cocktails.

Here's how to make the best 321 Ribs. Learn how to make smoked ribs using the 321 method, 3 hours of smoke, 2 hours wrapped, 1 hour unwrapped, then served.